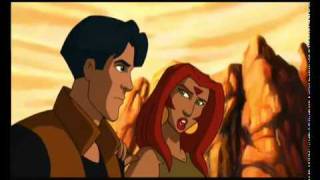 The story of King Kong is resurrected in this animated tale, as scientists use DNA from the original ape to construct a very similar beast. But in an amazing development, this new Kong can be fused with a human being named Jason to create an entity that is half man, half beast. Together they undertake an epic adventure to the lost city of Atlantis, where Kong is offered the chance to rule the ancient city. But Jason discovers a dark, twisted secret behind Kong's sudden upturn in fortunes, and has to persuade him not to take the position for the sake of the islanders.

Kong: King of Atlantis
Kong's demise was legend, his rebirth a well guarded secret. Using DNA from the original, a new Kong was born--gigantic and primal with increased strength and ability. The new Kong is no ordinary ape--through an amazing cyber-link, Kong and his human "brother" Jason can merge into one.
When an ancient prophecy starts to come true, the sunken city of Atlantis begins to rise. The evil Queen Reptilla plans to take this opportunity to trick Kong into becoming her King, using him as her slave to unite the warring clans of Atlantis for her own evil gains.
In a race against time, Jason must convince Kong that Queen Reptilla is evil, in the hope that together they can save the island and its inhabitants. Join Kong as he struggles between a sense of duty to his home and friends and the allure of an amazing world, where extraordinary beasts and beings wait to honor and serve him as King of Atlantis!