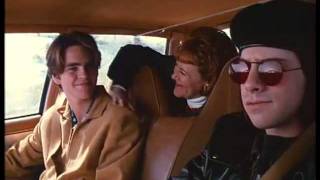 The way surfer dude Mitchell Goosen sees it, there are two kinds of people: those who surf and those who don't. So when Mitch (Shane McDermott) relocates from surfside California to wintry landlocked Cincinnati, there's just one thing he can do: put on skates and get Airborne!

A kid uprooted from his cool California beach scene must prove himself in snowy Cincinnati. Soon his reputation and his survival may depend on his outrageous skateboarding and roller-blading skills. Soundtrack by Stewart Copeland.

Action | Teenage
This product is made-on-demand by the manufacturer using DVD-R recordable media. Almost all DVD players can play DVD-Rs (except for some older models made before 2000) - please consult your owner's manual for formats compatible with your player. These DVD-Rs may not play on all computers or DVD player/recorders. To address this, the manufacturer recommends viewing this product on a DVD player that does not have recording capability.