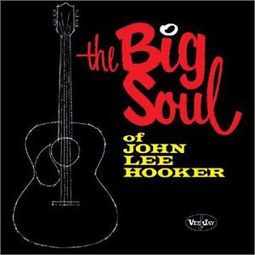 This album, originally released by Vee-Jay in 1963 and now digitally remastered, is full of Blues gems such as "She Shot Me Down", "Good Rockin' Mama", and "Old Time Shimmy".

Originally released on Vee-Jay in 1963.
Includes original liner notes by John W. Peters.
All tracks have been digitally remastered.
Personnel: John Lee Hooker (vocals, guitar).
Recording information: 1963.
There may not be much running time to this LP -- not even 30 minutes -- but John Lee Hooker gives us value for every second there is, and in a totally unexpected setting. Jumping into the R&B and soul explosions of the early '60s -- or at least dipping his toe into them -- he's backed here by the Vandellas, no less, on all but one of the 11 songs here. And coupled with an uncredited band that includes organ accompaniment, among other attributes that one doesn't usually associate with Hooker, he pulls it off. Indeed, he manages to straddle blues and soul far better than, say, Muddy Waters did during this same period; he's still a little too intense for the more pop side of the field, but he's also stretching the appeal of the blues with every nuance on this record, and there are a few cuts here, such as "Send Me Your Pillow" that would have fit on any of Hooker's far more traditional-sounding blues releases; and others, such as "She Shot Me Down" (a rewrite of "Boom Boom"), that are so close to his well-known standard repertory that they slip right into his output without explanation. And the whole album is short enough so that even if he would have gone wrong -- which he didn't -- there was only so far he could have gone wrong. As it is, this is near-essential listening as some of Hooker's most interesting work of the '60s. ~ Bruce Eder