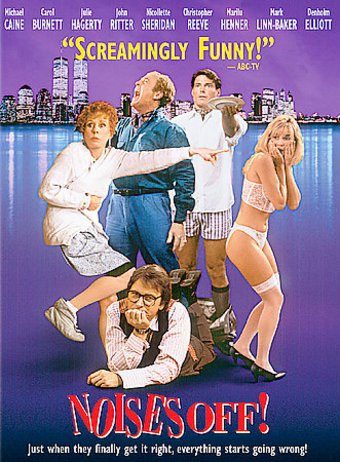 Peter Bogdanovich directs Michael Frayn's brilliant Tony-winning play about the trials and tribulations of a group of inept British actors--transformed here to American characters--as they prepare for the opening of a show. Director Lloyd Fellowes (Michael Caine) can't seem to get Dotty Otley (Carol Burnett) to remember which props go where and when, perhaps because she's too distracted by her budding relationship with Garry Lejeune (John Ritter). Frederick Dallas (Christopher Reeve) is having problems at home, which is fine with Belinda Blair (Marilu Henner), who would like him for herself. Beautiful, vapid Vicki (Nicollette Sheridan) is having a fling with Fellowes, which is news to everyone, including stage manager Poppy Taylor (Julie Hagerty) and handyman-understudy Tim Allgood (Mark Linn-Baker). The whole cast is looking for Selsdon Mowbray (Denholm Elliott), who is usually napping or trying to sneak a drink. Hilarious hijinks and mayhem ensue as the show tours the country en route to Broadway and the players have to deal with their personal issues while performing. A strong ensemble cast does justice to this hysterical farce.

Noises Off!
This hilariously sexy, all-star comedy promises to be an entertaining treat you're sure to love! Featuring some of today's biggest comedy favorites, including Carol Burnett (TV's THE CAROL BURNETT SHOW), John Ritter (BAD SANTA), Michael Caine (THE CIDER HOUSE RULES), and Christopher Reeve (SUPERMAN) -- NOISES OFF! is an outrageously funny look at the love, lies, and deceit that take place behind the scenes as a group of ridiculously inept stage actors rehearse a Broadway-bound play! Just when members of this chaotic cast finally get their performances right, everything starts going wrong!

Based on Michael Frayn's Tony-winning play, Peter Bogdanovich's NOISES OFF is a frenetic, raucous look at the love, lies, and deceit that take place behind the scenes of an off-Broadway play. Moving the setting from England to the United States, this farce reveals a traveling troupe of actors who, when they finally get their onstage performances right, find their backstage lives going wrong.

The Importance of Being Earnest
$10.90
Add to Cart