A wanted man searches for the cattle rustler who framed him for the murder of his father./The U.S. Cavalry faces Indians in the Florida everglades. 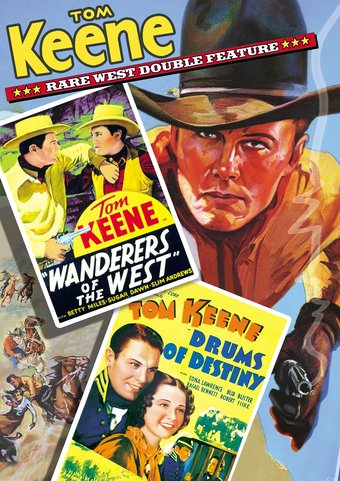 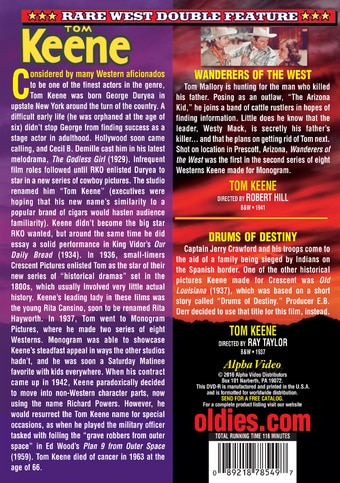 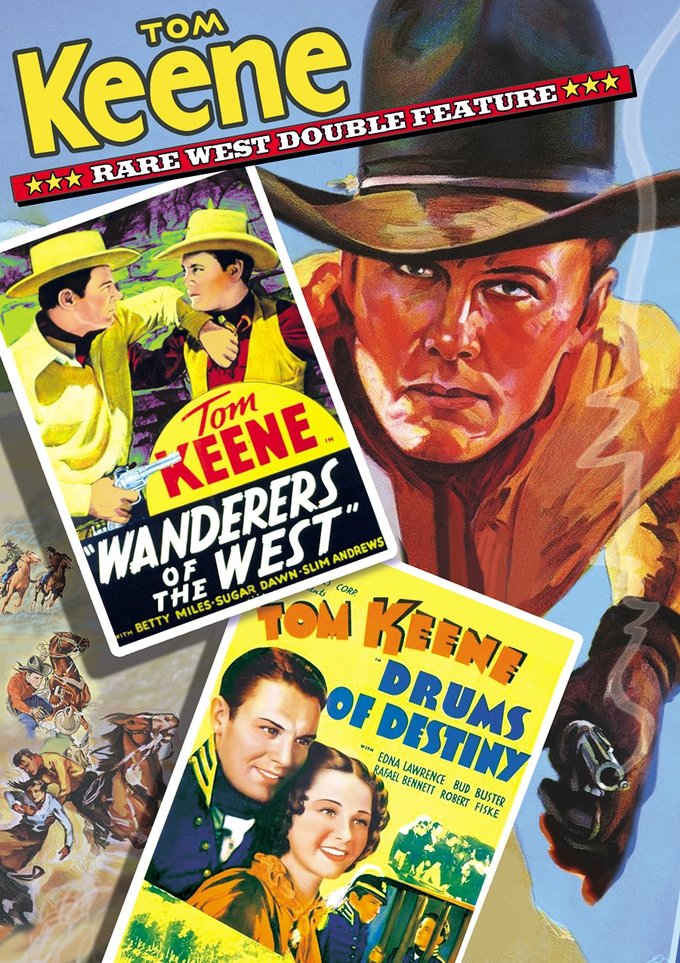 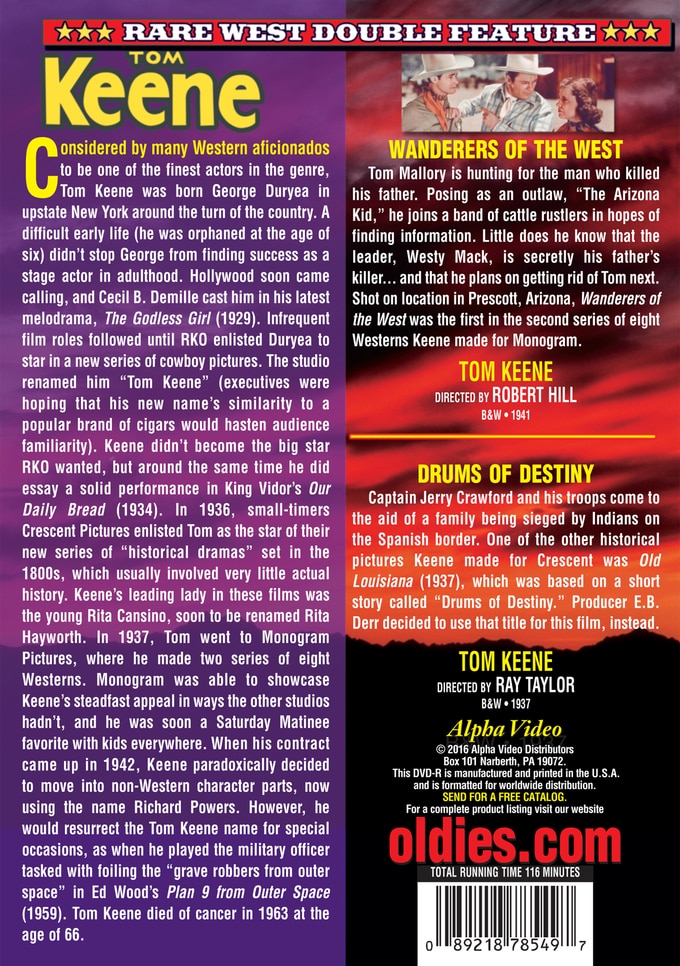 Considered by many Western aficionados to be one of the finest actors in the genre, Tom Keene was born George Duryea in upstate New York around the turn of the century. A difficult early life (he was orphaned at the age of six) didn't stop George from finding success as a stage actor in adulthood. Hollywood soon came calling, and Cecil B. Demille cast him in his latest melodrama, The Godless Girl (1929). Infrequent film roles followed until RKO enlisted Duryea to star in a new series of cowboy pictures. The studio renamed him "Tom Keene" (executives were hoping that his new name's similarity to a popular brand of cigars would hasten audience familiarity.) Keene didn't become the big star RKO wanted, but around the same time he did essay a solid performance in King Vidor's Our Daily Bread (1934). In 1936, small-timers Crescent Pictures enlisted Tom as the star of their new series of "historical dramas" set in the 1800s, which usually involved very little actual history. Keene's leading lady in these films was the young Rita Cansino, soon to be renamed Rita Hayworth. In 1937, Tom went to Monogram Pictures, where he made two series of eight Westerns. Monogram was able to showcase Keene's steadfast appeal in ways the other studios hadn't, and he was soon a Saturday Matinee favorite with kids everywhere. When his contract came up in 1942, Keene paradoxically decided to move into non-Western character parts, now using the name Richard Powers. However, he would resurrect the Tom Keene name for special occasions, as when he played the military officer tasked with foiling the "grave robbers from outer space" in Ed Wood's Plan 9 from Outer Space (1959). Tom Keene died of cancer in 1963 at the age of 66.

Wanderers Of The West (BW, 1941): Tom Mallory is hunting for the man who killed his father. Posing as an outlaw, "The Arizona Kid", he joins a band of cattle rustlers in hopes of finding information. Little does he know that the leader, Westy Mack, is secretly his father's killer...and that he plans on getting rid of Tom next.

Shot on location in Prescott, Arizona, Wanderers of the West was the first in the second series of eight Westerns Keene made for Monogram. In these films Tom was paired with ten-year-old Sugar Dawn (real name Mervelyn Steinberg). A trick rider who was never seen without her paint pony Chiquita, Monogram thought Sugar would appeal to the kids who went to see Westerns. In fact, the predominantly male audiences were nauseated by the saccharine junior cowgirl, and she was dropped after the fifth in the Keene series, Arizona Round-Up (1942), which was also her last appearance on film. Directed by Robert Hill.

Drums Of Destiny (BW, 1937): Captain Jerry Crawford and his troops come to the aid of a family being sieged by Indians on the Spanish border. After questioning the marauders, Jerry learns that rebel Spaniards have been supplying the Indians with weapons. Now the soldiers must stop the contraband from reaching the frontier without causing all-out war. One of the other historical pictures Keene made for Crescent was Old Louisiana (1937), which was based on a short story called "Drums of Destiny". Producer E.B. Derr decided to use that title for this film, instead. Directed by Ray Taylor