One Night at McCool's R 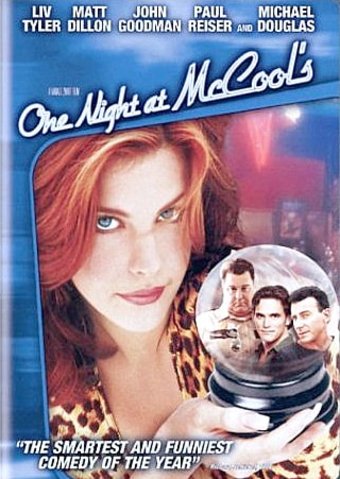 46K ratings
Currently Out of Stock: We'll get more as soon as possible
Notify Me When Available
Add to Wishlist
Format:  DVD
item number:  JTZ 22674D
91% recommend us!

The title refers to the night when three men, Randy (Matt Dillon), his cousin Carl (Paul Reiser) and Detective Dehling (John Goodman), all meet Jewel Valentine (Liv Tyler) at a bar called McCool's. Actually, they don't so much meet her as fall under her spell when they first lay eyes on her. In her clinging red dress she looks like a cross between a beautiful damsel in distress and the Lady In Red looking for John Dillinger. The story begins with Randy, desperate to be rid of Jewel, hiring a sleazy hitman, played by Michael Douglas in an outré toupee. His story of how Jewel led him to ruin, filmed in a stylized flashback bathed in blue, is mirrored by Carl talking to his therapist--played with a delicious verve by Reba McEntire, and Detective Dehling talking with a priest; each telling their own stories of obsession with Jewel. Tyler is clearly beautiful, but it's the evil, scheming side of her character--delivered with voluptuous softness and irresistible badness--that makes the men's actions, however ridiculous they become, feel completely believable. Dillon, Goodman, and Reiser are all type cast in their familiar personas, but the story moves quickly, the dialogue doesn't have that forced sitcom feel, and a running gag involving a wooden Indian builds to an amusing pay-off.

Employee of the Month
$8.70 Super Savings
Add to Cart

The Adventures of Pluto Nash
$16.20
Add to Cart

Employee of the Month (Blu-ray)
$13.40 Super Savings
Add to Cart