Golden Age: Superstars (Harvest / The Hospital / Mutiny on the Nicholette) 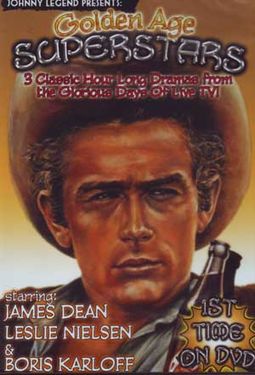 ROBERT MONTGOMERY PRESENTS "HARVEST" (1953)
Screen star Montgomery hosts and narrates this epic tale of an American farming family in crisis. The older sons have left home; the crop is destroyed in a hailstorm; Gramps is about to turn 100; and younger son James Dean has his eyes on a local rich girl and hopes to join the navy to escape his hayseed heritage. Ed Begley and Dorothy Gish play the father & mother, desperately struggling to keep things together. Performed live on kinescope, directed by James Sheldon with original commercials. Montgomery interviews Gish at the conclusion.

THE HOSPITAL (1952) One of the great "lost" TV dramas of all time--the prototype for all future medical dramas from "Ben Casey" to "ER." Leslie Nielsen stars as the courageous young doctor; Victor Jory (Gone With the Wind) plays the suicidal head administrator; Nancy Marchand ("Lou Grant") is the besieged receptionist. The waiting room is filled with colorful characters, patients are in crisis, and one drunken employee is lumbering around wreaking havoc.

MUTINY ON THE NICHOLETTE (1951)
Boris Karloff gives one of his greatest performances as Captain Skagg, a volatile, obsessed seaman who is replaced for this one voyage by a new captain to deliver an important cargo of weapons to North Africa. Karloff becomes convinced that the new man is in fact a Nazy spy! Mutiny and madness reign supreme in this ambitious live production which takes place entirely at sea. Complete with original commercials.