War Why Can't We Be Friends? 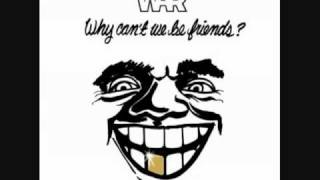 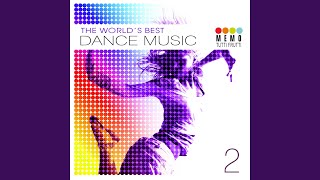 War: Howard Scott (guitar, percussion, vocals); Charles Miller (alto, tenor & baritone saxophones, clarinet, percussion, vocals); Lee Oskar (harmonica, percussion, vocals); Lonnie Jordan (piano, organ, percussion, vocals); B.B. Dickerson (bass, percussion, vocals); Harold Brown (drums, percussion, vocals); Papa Dee Allen (conga, bongos, percussion, vocals).
Additional personnel: Sharone Scott, Milton James, Moses Wheelock (background vocals).
Engineers: Ed Barton, Andrew Berliner, Chris Huston.
Originally released on United Artists (441) in June, 1975. Includes liner notes by Barry Alfonso.
This was War's sixth LP (their 8th counting the two with Eric Burdon). It was released in 1975, charting for 31 weeks and peaking at #8. The title song was a top-10 hit.
One of War's best-known and best-selling albums, WHY CAN'T WE BE FRIENDS? is the crown in the band's 1970s winning streak at United Artists. Both sunnier and more heavily Latin-themed than the group's earlier releases, the disc finds War distilling its experimental blend of multicultural pop styles into a refined, irresistibly attractive record. From the positive, Caribbean-flavored opening cut, "Don't Let No One Get You Down," to the superb funk of "Heartbeat," to the four-part medley "Leroy's Latin Lament," WHY CAN'T WE BE FRIENDS? is full of outstanding songs.
Of course, the disc also contains the infectious title cut. With its simple melody paired with reggae beats and sprightly horns, "Why Can't We Be Friends?" is custom-made for sing-alongs. Also present is a contender for the world's grooviest tune--"Low Rider." Endlessly played, covered, sampled, and referenced, this ode to cruising, with its rumbling bass and punchy horn melody, carries an appeal that never seems to diminish. These gems are the brightest spots on one of War's finest releases, an album that should find its way to the ears of any listener interested in funk or '70s pop in general.