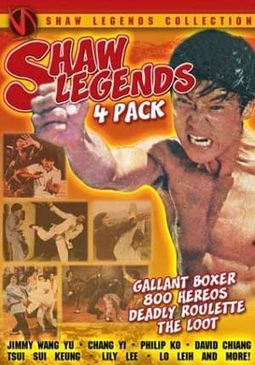 GALLANT BOXER: It's Jimmy Wang Yu times three! This trilogy of short films has Wang Yu as various characters in troubles of all kinds. The one thing they have in common is the ability to unleash the Kung Fu beast within where the going gets rough! A rare and sought after Wang Yu classic is finally available!

800 HEROES:Shaw Legend Chang Yi (Bells of Death) stars in this true story of how 800 men fought off the Japanese Army in China. This film is drenched in blood and action!

THE LOOT: Shaw Legends Tsui Siu Keung (Bastard Swordsman) and David Chiang (5 Masters of Shaolin, Shaolin Mantis) team up to tear them up! The two scoundrels hit the lottery when they find a treasure, but Philip Ko (8 Diagram Pole Fighter) and Lily Li (Executioner from Shaolin) have other plans! Superb action from start to finish. A top rate Kung Fu epic!

DEADLY ROULETTE: Lo Lieh (Fists of White Lotus, 36th Chamber of Shaolin) joins forces with Korean kicking dynamo Bobby Kim in this cops and robbers thrillers. The odds are against them, but the action never lets up! A super rare action spectacular filled with fury!