Sex. Clothes. Popularity. Is there a problem here? 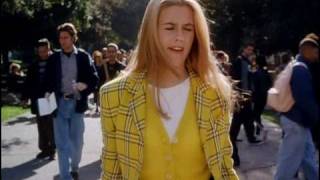 "You know how picky I am about my shoes, and they only go on my feet."
- Cher (ALICIA SILVERSTONE), explaining why she's still a virgin

A semi-vacuous, though well-dressed, Beverly Hills High student struggles with life, love and unlimited charge cards in this classic teen comedy from the director of FAST TIMES AT RIDGEMONT HIGH. Based, believe it or not, on Jane Austen's 1816 matchmaking comedy EMMA.

Loosely based on Jane Austen's classic, "Emma," high school teenagers in Beverly Hills (many of whom seem to be named after singers who now do television infomercials) change outfits, have nose jobs and cellular phones, and take care of everybody else's, except their own, social lives.

10 Things I Hate About You (10th Anniversary Ed.)
$6 Super Savings
Add to Cart