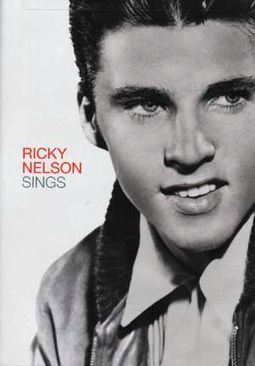 Ricky Nelson Sings is the premier look at one of the pioneers of Rock & Roll. Chronicling Ricky's evolution from teen sensation to rock star, it includes 20 of his timeless performances from eight years on "The Ozzie & Harriet Show" - among them, "Hello Mary Lou," "Travelin' Man" and "Lonesome Town" - plus all-new interviews with his children Tracy, Matthew, Gunnar and Sam, his original guitarist James Burton, and musician Kris Kristofferson. This edition also features an additional 30 minutes of bonus interviews and footage, including exclusive performances by the Nelson sons with James Burton. Boasting over 15 Top Ten hits, Ricky Nelson Sings is the definitive statement on an inimitable music legend.

This 60-minute feature documenting Ricky's performances on "The Ozzie & Harriet Show" includes "Hello Mary Lou," "Be Bop Baby," "I'm Walkin'," "Waitin' In School," "A Teenager's Romance," "Never Be Anyone Else But You," "Believe What You Say," "Fools Rush In," "It's Late," "Teenage Idol," "My Bucket's Got A Hole In It," "Lonesome Town," "You Tear Me Up," "Travelin' Man," "Everlovin'," "Young World," "Tryin' To Get To You" and "It's Up To You," plus an exclusive performance of "Garden Party" by Ricky's sons, Matthew, Gunnar and Sam Nelson.

Arguably the prototype for reality television, Ricky Nelson and his parents, Ozzie and Harriet Nelson, spent the years of Ricky's youth on a TV show closely based on their real lives and personalities. Showbiz appealed to young Ricky, and he embarked upon a career as a crooner and pop culture icon, which continued until his untimely death in a 1985 plane crash. This release includes a full-length PS TV documentary which features interviews with Ricky's children--Gunnar, Matthew, Tracy, and Sam--as well as 21 performances of some of his biggest hits.

Chuck Willis
I Remember Chuck Willis / King of The Stroll (CD)
$12.98 on Sale
Add to Cart