We Were Soldiers (Blu-ray) R

Different formats available:
We Were Soldiers (DVD) for $9.10
Our customers love us! 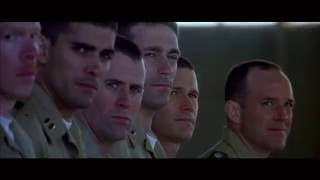 In 1965, 400 American troops faced an ambush by 2,000 enemy troops in the Ia Drang Valley (also known as the Valley of Death), in one of the most gruesome fights of the Vietnam War. WE WERE SOLDIERS is a detailed recreation of this true story: of the strategies, obstacles, and human cost faced by the troops that participated. The story focuses on the lieutenant colonel that led the attack, Hal Moore (Mel Gibson), and a civilian reporter who accompanied them, Joseph Galloway (Barry Pepper), as well as a number of other soldiers who were involved.

This is an unusual Vietnam film in that it also shows the North Vietnamese perspective on the battle; their leader Lieutenant General Nguyen Huu An (Don Duong) is depicted as a brave soldier and smart commander. And in addition to the many gory battlefield sequences--which seem to have been influenced by SAVING PRIVATE RYAN--we also see how the carnage of war affects those left behind, the soldiers' wives and children. Ultimately this is a moving anti-war film, which, by sticking close to the true stories of real soldiers, very effectively brings home the overwhelming horror of war.