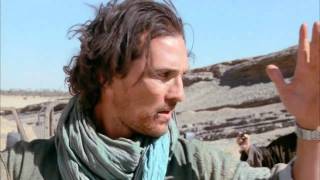 Dirk (Matthew McConaughey) and Al (Steve Zahn) have been friends since kindergarten, having also gone through college and the Navy together. The two now work for a former admiral traveling around the world and salvaging treasures from the sea with the National Underwater and Marine Agency (NUMA). In his spare time, Dirk is obsessed with the 150-year-old mystery of the Texas, an Ironclad battleship that reportedly disappeared from Richmond, Virginia during a Civil War battle and turned up in Africa. When a Confederate coin--allegedly one of only five minted--surfaces in Mali, Dirk and Al plan to travel there from Lagos, Nigeria on the admiral's yacht to investigate. Meanwhile, in Lagos, Dirk meets Eva (Penelope Cruz), a doctor for the World Health Organization (WHO) who believes that there is a plague building in Mali. Since the WHO is unable to find another way into the war-torn country, Dirk and Al give Eva and her colleague a lift up the river. Once in Mali, Dirk, Al, and Eva quickly find themselves embroiled in trouble as she pursues the source of the disease. Meanwhile, Dirk and Al search for the Texas.

Based on a novel by Clive Cussler, SAHARA is a rollicking thrill ride through exotic locales, including everything from high-speed boat chases to helicopter pursuits to jeeps racing through the desert to camel rides. A warlord and a greedy French businessman prove to be formidable villains for the trio. McConaughey fits the bill as gentleman and adventurer Dirk, while Zahn holds his own as likeable sidekick Al. Cruz is feisty as independent Eva. Director Breck Eisner's theatrical feature film debut also features William H. Macy as the admiral.

28%off
Sky Captain and the World of Tomorrow (DVD)
$6.50 Super Savings
Add to Cart