Rolling Stone: 3 stars out of 5 - "SWEET REVENGE has the same shout-along choruses, speedy drums and horror themes that fueled Glenn Danzig's old outfit, but it also adds cool metal licks and a sneaky sense of humor..." 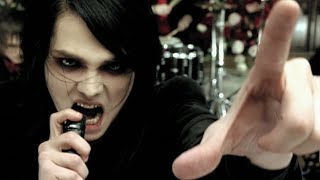 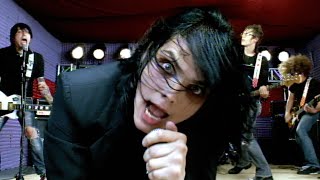 Rolling Stone - p.120
3 stars out of 5 - "SWEET REVENGE has the same shout-along choruses, speedy drums and horror themes that fueled Glenn Danzig's old outfit, but it also adds cool metal licks and a sneaky sense of humor..."
Spin - p.63
Ranked #34 in Spin's "34 Best Albums of the Year" - "[They] take emo to its logical comic-book conclusion on an album with a plot that's like Dante for the Hot Topic crowd."

My Chemical Romance: Gerard Way (vocals); Frank Iero, Ray Toro (guitar); Mikey Way (bass guitar); Matt Pelissier (drums).
For its major-label debut, My Chemical Romance amps up the melodies in transforming its unique hardcore approach to more of a pop-punk style. To say this Jersey quintet subscribes to the half-empty-glass outlook on love and relationships is like saying Johnny Rotten is a slightly irritable chap. Buried amid the abundant sing-along choruses and the tasty, two-guitar attack of fretburners Ray Toro and Frank Iero is doom-and-gloom imagery that ranges from the suicidal allusions of the soaring "Cemetery Drive" to the murder and firing squads of the insistent "Give 'Em Hell Kid." Frontman Gerard Way exudes plenty of charisma, and his clear and powerful phrasing works well in a format where vocal precision is often an afterthought. In particular, Way shines within the bizarre confines of the quirky "You Know What They Do to Guys Like Us in Prison" and the subtler nuances of the dream-pop-flavored "The Ghost of You." Falling somewhere between metal and punk with a distinctive pop sensibility, THREE CHEERS FOR SWEET REVENGE puts My Chemical Romance in line for the kind of success achieved Blink 182.

48%off
My Chemical Romance
Things That Make You Go Mmmm!
$5.20 Super Savings
Add to Cart