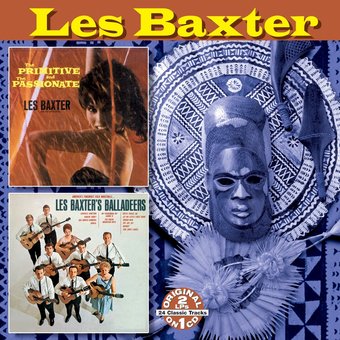 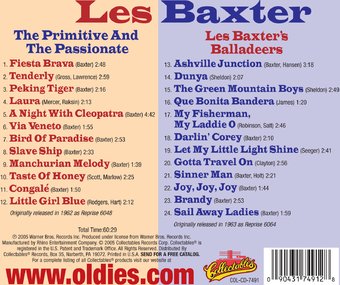 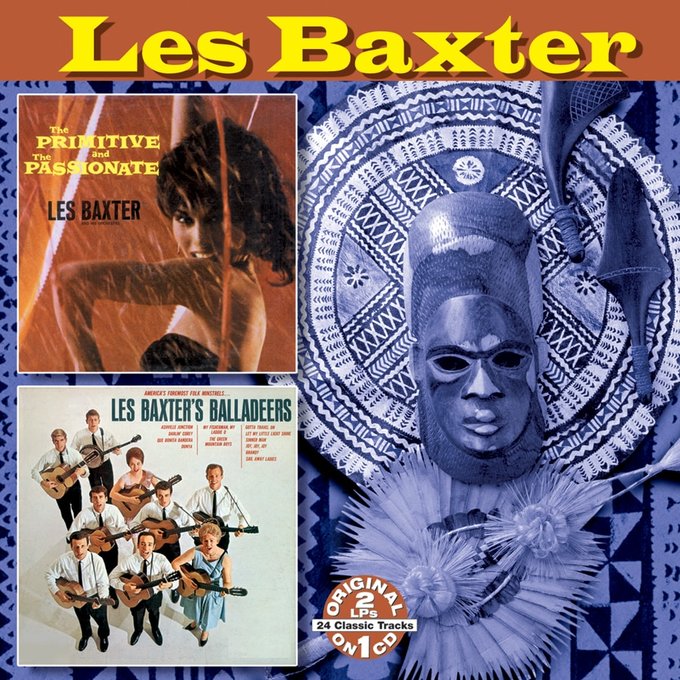 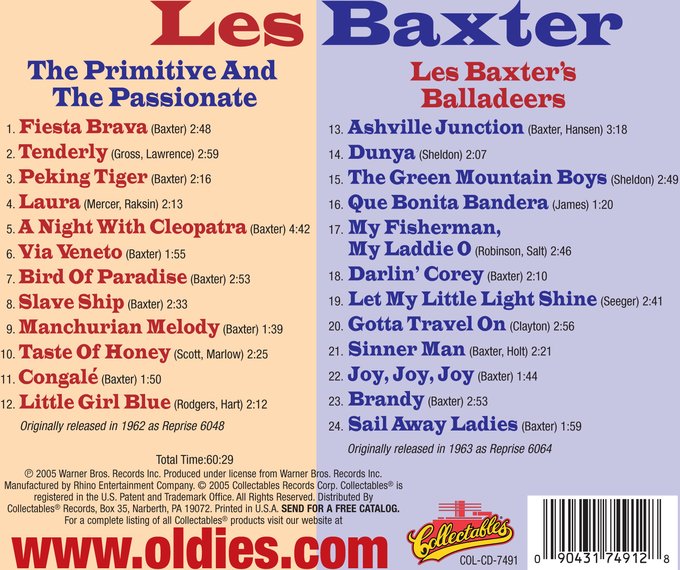 Two complete classic albums comprised of almost entirely original material by Les Baxter. The Primitive and the Passionate was originally released by Warner Bros. in 1962, and Les Baxter's Balladeers was released by the same label in 1963. With 24 total tracks on one CD, this compilation is sure to please any Les Baxter fan.

2 LPs on 1 CD: THE PRIMITIVE & THE PASSIONATE (1962)/LES BAXTER BALLADEERS (1962).
Liner Note Author: Al Fichera.
Another in Collectables' series of Les Baxter two-fers, The Primitive and the Passionate/Les Baxter's Balladeers collects a pair of the composer/conductor's early-'60s albums. With song titles like "Peking Tiger" and "A Night with Cleopatra," 1962's The Primitive and the Passionate is a pretty typical -- and entertaining -- mix of Baxter's instrumental exotica and standards. And, while the relatively straightforward renditions of "Laura," "Little Girl Blue," and "A Taste of Honey" might be a little too tasteful to pique the interest of modern exotica/lounge fans, their supreme smoothness is almost as much of an accomplishment as the album's more whimsical moments. These include the spooky, mariachi-lounge of "Fiesta Brava"; the Latin rhythms and smoky flutes on "Congal‚"; and "Bird of Paradise," a sunny, string-driven track that builds on Baxter's quintessential hit, "Quiet Village." Les Baxter's Balladeers, on the other hand, goes in a completely different direction: instead of exploring and borrowing from the music of exotic cultures, on this 1963 album Baxter delves into the sounds of traditional American music in response to the era's folk music resurgence. With its simple production and the focus on the Balladeers themselves (including Phil Campos, Ernie Sheldon, and Jerry Yester in this incarnation), this album feels less like a Les Baxter album than a solid collection of early-'60s folk-pop. However, the versions of "Ashville Junction," "Sail Away Ladies," and Sheldon's originals "The Green Mountain Boys" and "Dunya" still exemplify what that sound was all about. ~ Heather Phares

60%off
Luther Henderson & His Orchestra
Clap Hands! / Greatest Sound Around (CD)
$5.98 on Sale
Add to Cart