They had a date with fate in Casablanca! 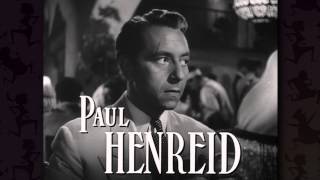 "Here's looking at you, kid."
- Humphrey Bogart (Rick) to Ingrid Bergman (Ilsa) at least three times during the course of the film
"Only one answer can take care of all our questions."
- Ilsa just before kissing Rick
"But of course, that was the day the Germans marched into Paris." "Not an easy day to forget. I remember every detail--the Germans wore gray, you wore blue."
- Interchange between Rick and Ilsa at his cafe after seeing each other for the first time in years
"Of all the gin joints in all the towns in all the world, she walks into mine."
- Rick about Ilsa
"We'll always have Paris."
"Louis, I think this is the beginning of a beautiful friendship."
"Play it, Sam. Play 'As Time Goes By.'"
"Round up the usual suspects."

World War II Morocco springs to life in Michael Curtiz's (THE ADVENTURES OF ROBIN HOOD, YANKEE DOODLE DANDY) classic love story. Colorful characters abound in Casablanca, a waiting room for Europeans trying to escape Hitler's war-torn Europe. Humphrey Bogart plays Richard "Rick" Blaine, a cynical but good-hearted American whose café is the gathering place for everyone from the French Police to the black market to the Nazis. When his long-lost love, Ilsa (Ingrid Bergman), surfaces in Casablanca with her Resistance leader husband, Victor Laszlo (Paul Henreid), Rick is pulled into both a love triangle and a web of political intrigue. Ilsa and Victor need to escape from Casablanca, and Rick may be the only one who can help them. The question is, will he'

Top-notch performances include Claude Rains as the chief of the French police and the major authority figure in Unoccupied France, Peter Lorre as the doomed Senor Ugarte, Sydney Greenstreet as Senor Ferrari, and Dooley Wilson as Rick's loyal friend and the café's pianist, Sam. The mesmerizing musical score, by Max Steiner, along with the well-structured plot, flawless acting, and unforgettable dialogue makes this one of the best films of all time.

To Kill a Mockingbird (Blu-ray)
$19
Add to Cart