See Barbarella do her thing! 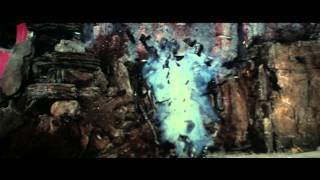 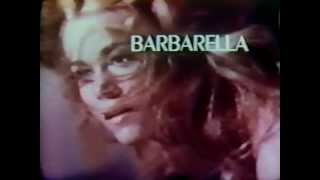 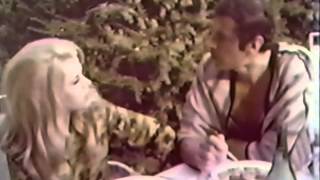 Behind the scenes of "Barbarella" 1968 featurette

"I'll do things to you that are beyond all known philosophies. Wait untill I get my devices!"
- Duran Duran (Milo O'Shea) to Barbarella (Jane Fonda).

Barbarella is marked by the same audacity and originality, fantasy, humor, beauty and horror, cruelty and eroticism that make comic books such a favorite. The setting is the planet Lythion in the year 40,000, when Barbarella (Jane Fonda) makes a forced landing while traveling through space. She acts like a female James Bond, vanquishing evil in the forms of robots and monsters. She also rewards, in an uninhibited manner, the handsome men who assist her in the adventure. Whether she is wrestling with Black Guards, the evil Queen, or the Angel Pygar, she just can't seem to avoid losing at least part of her skin-tight space suit.

In this notorious film version of the popular French comic strip by Jean-Claude Forest, Jane Fonda plays a sexy yet innocent space-age heroine in the year 40,000 A.D. who never gets herself into a situation that requires too much clothing. BARBARELLA opens with the titular heroine stripping down to nothing in zero gravity among strategically placed credits. From there Barbarella embarks on a mission to find a peace-threatening young scientist named Duran Duran (Milo O'Shea) by order of the president of Earth. En route, she's attacked by killer dolls, is strapped into a contraption known as the Excessive Machine, and falls in love with a blind angel.

Remaining true to its comic book origins, Barbarella's adventure unfolds in a series of dramatic difficulties and unlikely solutions, making for a galloping pace and never-ending opportunities for Mario Garbuglia's hallucinatory set design to dazzle. With guest appearances by 1960s icons Anita Pallenberg, Marcel Marceau, and David Hemmings, and featuring dialogue by novelist Terry Southern, among others, BARBARELLA is not only a comic sci-fi sex romp but also a sly, tongue-in-cheek portrait of the legendary debauchery of that era.

Customer Rating:
Based on 64639 ratings.


Besides some of its racier scenes, one can't help but appreciate Fonda's "dumb-blonde" character, stumbling from one harrowing close-call to the next, between sexy romps, while saving the future universe. But, I'm not sure I wouldn't rather prefer to fall into the clutches of the evil queen. A critic's choice it ain't... but it is a lotta fun...

25%off
Voyage to the Planet of Prehistoric Women (DVD-R)
$5.95 Spring Sale
Add to Cart