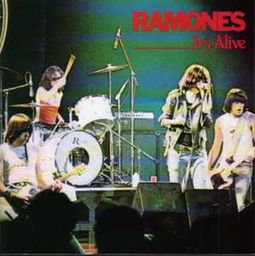 The Ramones: Joey Ramone (vocals); Johnny Ramone (guitar); Dee Dee Ramone (bass); Tommy Ramone (drums).
Recorded live at the Rainbow Theatre, London, England on December 31, 1977.
Personnel: Joey Ramone (vocals); Johnny Ramone (guitar); Tommy Ramone (drums).
Recording information: Rainbow Theatre, London, England [live] (12/31/1977).
No band so richly deserved the adjective "unrelenting" as the Ramones, especially on-stage. On their studio albums, the Ramones occasionally threw in some overdubs and production niceties to mix things up, but in concert, they were like a big-block hot rod thrown into fifth gear -- your best bet was to hold on tight, because they weren't slowing down any time soon. There is no better recorded document of the Pride of Forest Hills showing an audience what's what than 1979's It's Alive, recorded at London's Rainbow Theatre on the last day of 1977 as they wrapped up a U.K. tour. If you're looking for nuance or variety, you're going to be let down, but that was never what the Ramones were about. Their purpose in life was to provide high-energy fun fueled by downstroked guitar, a loud snare on the two and four, and lyrics that could have been lifted from Mad Magazine, and It's Alive has those goods in plentiful supply. The set list collects the highlights from the group's first three albums, with the arrangements stripped to the essentials and played with the taut authority and sweat of a seasoned band hitting their marks. The performances on It's Alive are tight enough to harness the full power of the Ramones and their songs, but with just enough flexibility to make this stuff swing hard. This was the last Ramones album to feature the original lineup of Joey, Johnny, Dee Dee, and Tommy, with Marky Ramone taking over on drums in 1978. With It's Alive, they went out in style -- it's not only the best Ramones live album, it's one of the best and most effective live albums in the rock canon, and every bit as essential as Ramones, Leave Home, or Rocket to Russia. ~ Mark Deming