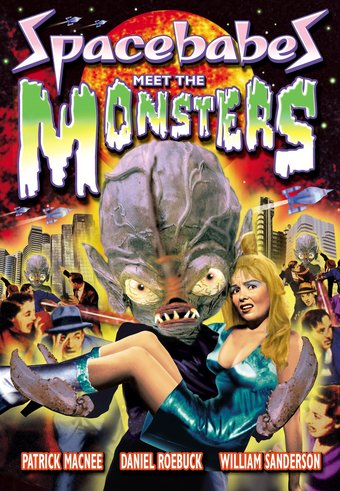 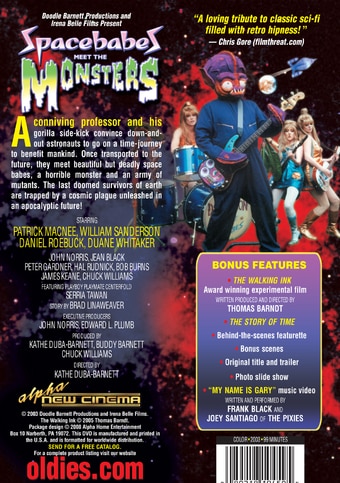 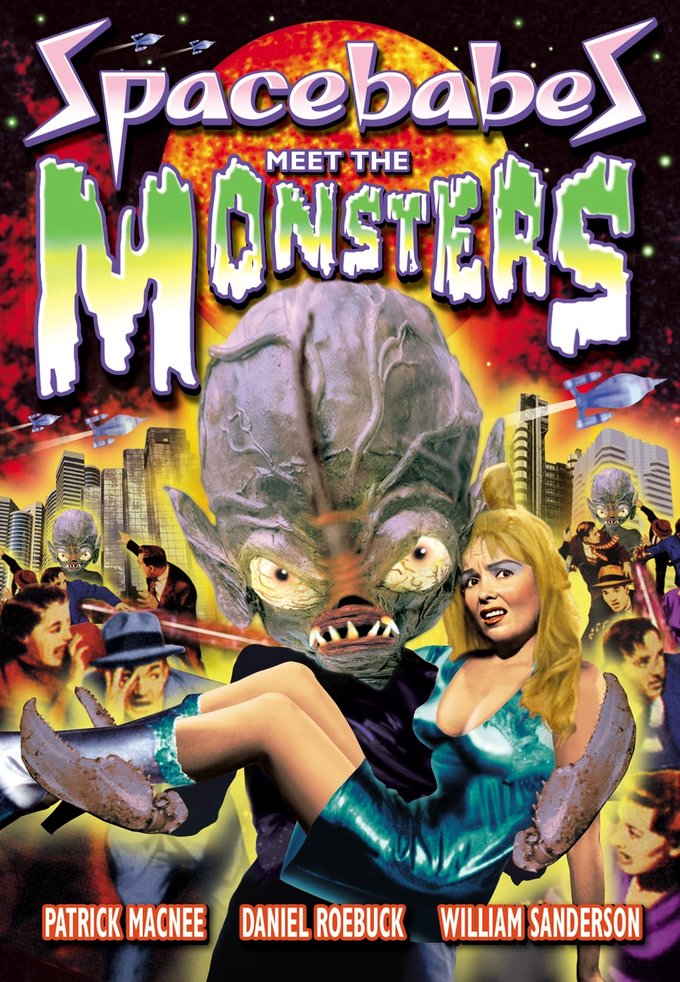 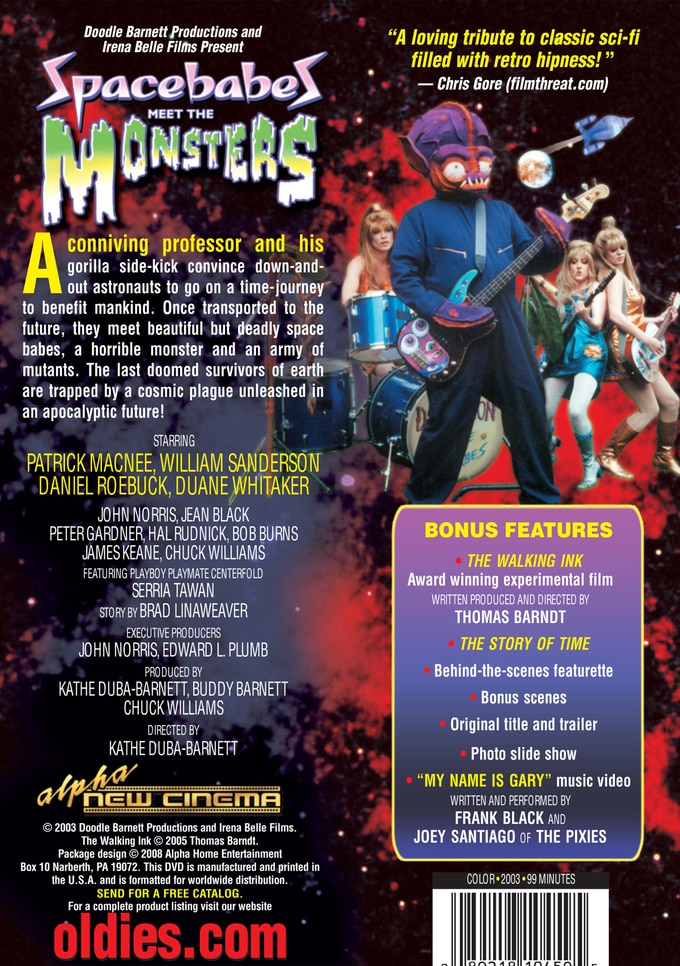 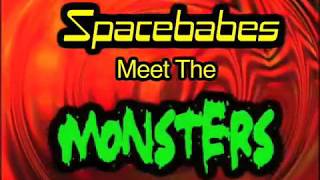 A conniving professor and his gorilla side-kick convince down-and-out astronauts to go on a time-journey to benefit mankind. Once transported to the future, they meet beautiful but deadly space babes, a horrible monster and an army of mutants. The last doomed survivors of earth are trapped by a cosmic plague unleashed in an apocalyptic future!

Monsters | Science-Fiction | Time Travel | Sci-Fi / Horror / Fantasy | Space | Outer Space | Scantily Clad Women
This product is made-on-demand by the manufacturer using DVD-R recordable media. Almost all DVD players can play DVD-Rs (except for some older models made before 2000) - please consult your owner's manual for formats compatible with your player. These DVD-Rs may not play on all computers or DVD player/recorders. To address this, the manufacturer recommends viewing this product on a DVD player that does not have recording capability.

Customer Rating:
Based on 27 ratings.


As the movie begins, Professor Staplejoy finds himself in a terrible predicament. It seems that instead of getting a grant to finance his research, he borrowed from a loan shark. He must either quickly raise the money to repay or else.
Staplejoy’s research is in time travel. He had intended to send a chimpanzee who serves as his lab assistant on the first historic trip into time. Due to his perilous situation, he instead decides to send three washouts from the astronaut program 1000 years into the future. Staplejoy assumes his three subordinates will find in that future civilization some invention of such value that he will be able to repay his debt and save his neck.
Using his time machine (that greatly resembles a hula hoop) he sends the three adventurers ahead in time. They, however, arrive in a desolate desert where one of the three and their time ring (hula hoop) are immediately carried off by a monster.
The two remaining time travelers are now on the clock. In 48 hours, the ring will automatically return to its origin and they will be trapped in this bleak time period. An old prospector (who is something of a mutant as he has a tentacle growing out of his head) informs them of two great dangers: the monster they have already encountered and some extraterrestrial women who have landed their spaceship in the desert. So, the time travelers’ great adventure begins.
Okay, this is an intentionally silly spoof of a ’50s’ B sci-fi movie. The movie has visitors from space, a mutant monster, scantily clad beauties, a decimated planet and even a very catchy rock and roll song. And, in slightly more than three-quarters of an hour, the film contains a barrel of laughs. I highly recommend it.


That's right, I just ordered 5 copies of Spacebabes and it was only $28.95 and that includes intergalactic shipping.

Not convinced that this DVD delivers laughs at top warp speed?

READ the reviews. There's not one negative review this side of the Milky Way.

The biggest bonus (besides Chuck Williams three roles and stalking with the camera for the behind the scenes) is Walking Ink. The DVD is worth this low price just to see Millie--the world's greatest pug acting today. Well, I think Millie's a pug. Millie could be a Border Collie, as her acting is that good.

My only warning: Be sure that you have an ample oxygen supply, because you'll need it to get through the laughs.


This movie is great campy fun and i love the song Frank Black did for it!!!..The short The Walking Ink on the dvd is great also!


This is a very fun, all star packed movie.The women are very beautiful and the story is quite cool. A must have for fans of the genre!! AND there is a rare track from the Pixies vocalist Frank Black that to this day I just cant get out of my head!! Well worth the money, and a great gift item as well!!


If you get the idea that “Spacebabes” doesn’t take itself too seriously, you’re onto something. This deliberately goofy sci-fi comedy resembles nothing so much as an extended skit from the old Carol Burnett show with hokey improvised futuristic props and silly costumes. The entire cast camps it up with tongues firmly planted in their cheeks, and they’re clearly having so much fun that the audience can’t help but have fun, too. -- Jack Veasey, Midnight Movies


Epic!! I'm sure that's what I meant! Epic!! 46 1/2 minutes (plus extras)of pure epic!! I especially loved the extras: The wonderfulness of
"Behind-the-Scenes," the profundity of the short, "The Walking Ink." I was greatly moved by the short subject, "The Story of Time." As a lover of science, I was literally brought to tear (s)! Physicists everywhere should be made to watch this in-depth study. It, of course, would solve the great question: What the Hell?


This movie is a complete and total waste of time, which is why I have watched it 3 times (so far)! It is the silliest, most enjoyable waste of time I have spent in eons. My kids love it too. This is the best six bucks you can spend on a ridiculously inane and hilariously entertaining spacechick flick.

These Spacebabes are Coming For You Movie Lover: Lawrence Lee from Gilbert, AZ US -- July, 13, 2008


Spacebabes Meet the Monsters (aka Low Budget Time Machine) materializes as one of the best nods to the Sci-Fi B-Movies to date, regardless of your home galaxy. From the stunning costumes for the Spacebabes (love the boots) to the Props (beamed from your Aunt Adelaide's kitchen sink and stolen from your Uncle Zig's local Bowling Alley) are all given a unique interplanetary existence by the script's witty plot and dialogue.
Kathe Duba-Barnett assembled and inspired great performances from some of the hardest working actors in the business. The gifted talent includes: Chuck Williams (playing 3 parts); Daniel Roebuck (worth it just to see him doing the Goon Chimp Dance); Duane Whitaker (wished he had a bigger part, maybe in Spacebabes sequel: Gary’s Revenge) William Sanderson (he has one fine place in the desert); James Keane (excellent performance as Dr. Staplejoy will have you in stitches) and Bob Burns as Zotz, the ever faithful and insightful gorilla.
Spacebabes Meet the Monsters features a very rare acting performance by Frank Black of the Pixies. And it gets better…Frank provides the hit song that will rule the world.
This all adds up to amazing first class entertainment for the low budget price of $5.95. You can't fill your car up on that, but you can get a belly full of laughs.


Everyone should watch this movie.