The key to saving the future can only be found in the past. 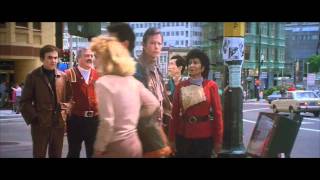 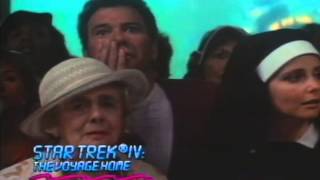 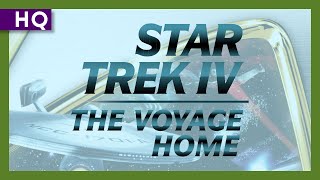 "Back in the '60s he was part of the Free Speech Movement at Berkeley -- I think he did a little too much LDS" [sic]
- Kirk (William Shatner) making excuses for Spock's (Leonard Nimoy) odd behavior.
"I may have carried your soul, but I sure couldn't fill your shoes."
- Dr. "Bones" McCoy (DeForest Kelley) to Spock (Leonard Nimoy).
"To hunt a race to extinction is not logical."
- Spock (Leonard Nimoy)

While back on Earth, standing trial for their hijacking of the starship Enterprise (see STAR TREK III), Kirk and his crew are thrust into a new adventure. A space probe threatens to destroy the planet if it is not allowed to continue its longstanding communications with a certain species of Earth mammal -- humpback whales. Unfortunately, there is an obstacle to their simple demand; the whales are extinct in the 23rd Century. So Kirk, Spock and the gang travel back in time to San Fransisco, circa 1986, where they battle culture shock, as well as the clock, while trying to corral a few friendly whales to bring back to the future. Academy Award Nominations: 4, including Best Cinematography, Best Original Score.

A contemporary Marine biologist becomes involved with Kirk and crew as they undertake a vital mission into Earth's past to save a species whose extinction poses a threat to the very existence of the planet. The Directors' Series version includes outtakes and commentary by director Leonard Nimoy.

50%off
Superman and Other Cartoon Treasures (DVD)
$1.98 on Sale
Add to Cart