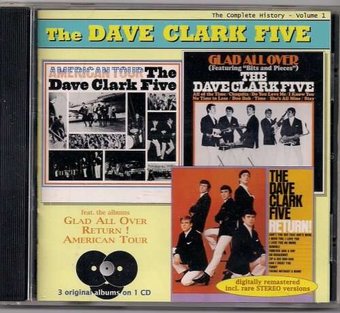 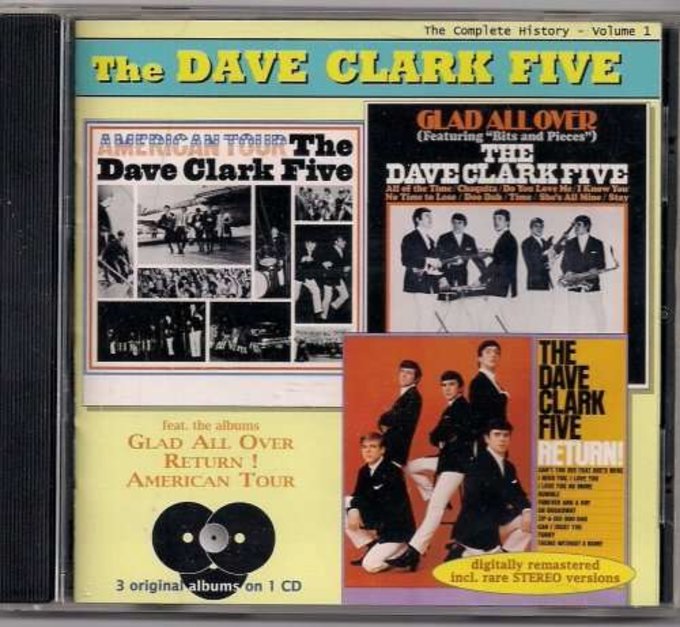 Dave Clark hasn't seen fit to release more than a relatively small part of the Dave Clark Five's classic sides on CD, and so the only way to get their material is either to find their complete U.S. and U.K. vinyl releases, or go the underground route. This CD purports to contain 33 tracks, the complete output of their group as released on their first three U.S. LPs, Glad All Over, Return!, and American Tour. It's actually missing three songs, one from Glad All Over ("I Know You") and two from American Tour ("Who Does He Think He Is," "Move On"), that are listed as being present -- even so, the disc clocks in at over 76 minutes, making this a very full meal if not quite the menu promised. The audio is generally very good and occasionally excellent, the larger-than-life sax and rhythm guitar sounds, and the occasional lead organ very much right in the listener's face, with very good clarity and presence on most of the songs; a few show some excess noise, but generally this is very good work for a bootleg. The producers have used stereo sources wherever they're available, which will serve to make this release competitive with Clark's authorized CDs. The material itself is mostly very strong, Glad All Over consisting of many of the group's best early singles releases, Return! containing virtually the complete contents of their first U.K. LP, and American Tour the first U.S. LP done under Clark's control, thus offering a good cross-section of the group's work as they rose to their commercial peak. The artwork is also a treat for fans, reprinting front and back LP jackets and picture-sleeve photos, and there is also the start of an extended historical essay on the band that continues across the next six volumes in the series. ~ Bruce Eder

Dave Clark Five
All Their U.S. Chart Hits In True Stereo For The First Time...
$22.40
Add to Cart