Whatever It Takes PG-13

How low will they go to get the girls of their dreams?

55K ratings
Currently Out of Stock: We'll get more as soon as possible
Notify Me When Available
Add to Wishlist
Format:  DVD
sku:  XRI 05285D
Also released as:
Whatever It Takes (Blu-ray) for $19
Whatever It Takes for $14.50
92% recommend us! 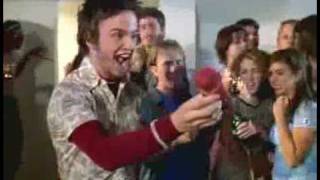 Loosely based on CYRANO DE BERGERAC, WHATEVER IT TAKES is a charming romantic comedy set in modern day high school. The film tells the tale of an uncool teenager, Ryan (Shane West), and a popular jock, Chris (James Franco), who team up to win the hearts of their dream girls (Marla Sokoloff and Jodi Lyn O'Keefe). Along the way, an endless barrage of comic situations adds flavor to the proceedings.

Ryan Woodman (West) is an accordion-playing high school senior with a longstanding crush on Ashley Grant (O'Keefe), the most popular girl in school, and a platonic friendship with Maggie (Sokoloff), his next-door neighbor. Maggie is one of the only girls in school that class stud Chris (Franco) hasn't won over, and he hopes to remedy that situation before graduation. Chris and Ryan agree to swap dating tips; Ryan will show Chris how to be the kind of sensitive, caring guy that will attract Maggie by volunteering at a retirement home and saying sensitive and poetic things. Meanwhile the seasoned Chris shows Ryan how to successfully hit on the beautiful but shallow and insecure Ashley. The two boys get closer to their goals, but by the time of the senior prom Ryan has realized that his true love was right next to him the whole time. But will his realization come too late to save Maggie from Chris's devious charms' A breezy teen comedy based loosely on the story of Cyrano de Bergerac, with the message that you should always be yourself.

She Gets What She Wants
$12.80 Super Savings
Add to Cart